From Gamergate and Dapper Laughs to HeForShe and Suffragette, the subject of gender equality and feminism is rarely out of the spotlight.

The media debate is often polarised and loud. But away from the noise, what do an emerging generation of young adults think? Read on to discover how many young women (and men) consider themselves feminists and whether they think feminism is necessary. We’re sharing ten new morsels from SYN, including a top ten list of today’s feminist icons.  Over 1,000 UK 16-24s took part in this research. See our research below, then download our free infographic to find out which 10 females millennial women find most inspiring.

Almost all young men and women believe in gender equality

The majority of young people believe feminism is an important movement

A large number of young women, 84%, believe that feminism is important, as do a majority 58% of men. Further down we discover that not all women consider themselves feminists, yet in this result we see that many of those that don’t identify as feminists still recognise the importance of the movement, with only 3% of women denying significance.

Most young people think feminism is needed in the developed world...

...and even more so in the developing world

We have fielded these questions twice in the last 10 months, once with a student sample and once with a broad sample of UK 16-24s including those in work. Despite very few differences between December 2014 and August 2015, we were surprised to find that young people feel there is less need for feminism in the developed world than last year. This is surprising because of the current campaign for equal pay in Hollywood and the call from the government to force top firms to disclose the gender pay gap amongst staff. Do our findings indicate that young people see these campaigns as solving the gender divide?

Feminism is defined as “the advocacy of women's rights on the ground of the equality of the sexes” therefore it seems incongruous that the majority who believe in equality do not describe themselves as feminists. It has been suggested that the issue for many is one of ‘branding’: the associations of feminism are not relatable or, for some, they are negative.

That said, the fact that around half of young women are happy to call themselves feminists contrasts sharply with a Netmums survey in 2012 that found only one in seven women identify as feminists “with younger women least likely to”. Are women now becoming more comfortable with a ‘feminist’ label or are the associations becoming less problematic?

A few aren’t sure exactly what feminism is

But the majority don’t think feminism is ‘anti men’

The notion that feminism is ‘anti men’ is a stereotype with no empirical accuracy – a 2009 study found that feminists were more likely to report lower levels of hostility towards men than non-feminists. But it is a stereotype that still survives in the minds of almost a third of young men.

Few of them think feminism is ‘cool’

With several female celebrities embracing feminism publically in recent times and gender equality making the front pages of mainstream magazines, some media commentators have written that feminism has become ‘cool’. But that’s not what most young people think. Both genders are in close agreement in our research, with only an average of 17.5% believing that feminism cool.

Young people are even less convinced that feminism is a fad. Considering that this subject is prevalent in current UK media discussion it is surprising that so few regard it like other topical subjects, as a passing concern. Some feminist writers have cautioned that the so-called ‘third wave’ of feminism (the first being the Suffragette movement and the second being the 1960s era) is at risk of being fleeting due to the interests of uncommitted pop and fashion heroines. Young people do not seem to share their concerns.

We asked our young women respondents: who is an inspiring female role model? 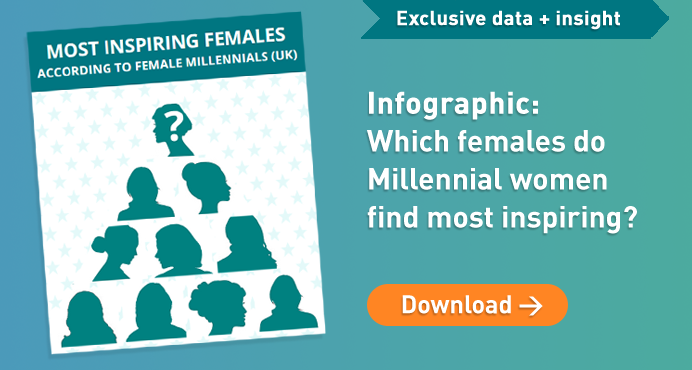 Keep up with the youth

We'll only use your personal information to provide you our insight articles. We'll only contact you via email and you may unsubscribe at any time.